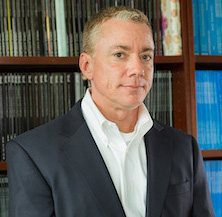 HOW WHEN PERSEVERANCE AND PASSION FINALLY PAY OFF

When Scott Jackson became CEO of Celator Pharmaceuticals, Inc. more than eight years ago, a new treatment for a blood cancer called acute myeloid leukemia (AML) hadn’t been approved in decades. Under Jackson’s leadership, Celator demonstrated in a Phase 3 clinical trial that its drug combination product called VYXEOS™ produced an overall survival benefit compared to the current standard of care (known as 7+3, which was first published in the 1970s) in high-risk AML patients. The results caught the attention of pharmaceutical companies, in particular Jazz Pharmaceuticals plc, which acquired Celator in July for about $1.5 billion. At the time, Celator was about to embark on the process of seeking FDA approval, which presented an attractive opportunity for the Irish pharmaceutical company.

VYXEOS is based on Celator’s proprietary technology platform, CombiPlex®, which enables the design and evaluation of optimized drug combinations, like VYXEOS, to improve patient outcomes. VYXEOS could become a new standard of care for AML, giving new hope for patients with the disease.

“We demonstrated an overall survival benefit, compared to the standard of care, in AML patients, which hasn’t been seen in a long, long time,” Mr. Jackson says.

Mr. Jackson is no longer with the company, now that Celator is an indirect wholly owned subsidiary of Jazz, and he is considering his next move. In an interview with Ashton Tweed, Mr. Jackson talks about his career path, an email message that meant a lot to him, and his plans for the future:

You’ve worked at several very large pharmaceutical companies including Eli Lilly and SmithKline Beecham. Why did you leave Big Pharma?

I had the opportunity to go to a smaller, more entrepreneurial environment at ImClone Systems more than 15 years ago. I really liked wearing multiple hats while at ImClone, in contrast to being in what I consider more of a silo within Big Pharma companies. I was dealing with regulatory, manufacturing, clinical, and commercial questions and opportunities, and it really struck a chord with me.

Then I went to Centocor – which requires a little explanation. It was owned by Johnson & Johnson at the time but really was an entrepreneurial environment with Big Pharma resources, making it the best of both worlds at first. Over time, it morphed into doing things more in the way J&J did things and while there’s nothing wrong with that, it just didn’t appeal to me after being in an environment where I could contribute to multiple functional areas.

So I left and went to my first privately held company, Eximias, which was subsequently acquired by YM BioSciences. I left YM about a year after it acquired Eximias and joined Celator – that was about eight and a half years ago.

You joined Celator as head of commercial development. How did you become CEO after less than a year?

My background was in the commercial and clinical development sides of the business, and that’s what I brought to Celator. About six months after joining, the board wanted to make a change and asked me to assume the responsibilities of CEO. I was CEO of Celator for more than eight years, initially when the company was private and then working with the board and our management team to take the company public.

Tell us about the success Celator had with VYXEOS.

In March of this year, Celator reported the Phase III outcome of VYXEOS compared to the current standard of care, known as 7+3, in patients with high-risk (secondary) AML.As an aside, the reason that it’s called 7+3 is because the two drugs comprising the standard of care are cytarabine and daunorubicin. Cytarabine is a seven-day continuous infusion and daunorubicin is on days one, two and three. Hence the 7+3 moniker. Before VYXEOS, nothing else had come along that was better than the 7+3 regimen. VYXEOS is a synergistic 5:1 molar ratio of cytarabine and daunorubicin, based on our CombiPlex technology platform, administered in a 90-minute infusion on days 1,3 and 5 only.

VYXEOS demonstrated an overall survival benefit in the Phase III clinical trial. That’s great news for AML patients, and it significantly raised Celator’s visibility after we announced the data.

Why does VYXEOS have orphan drug status?

In the U.S., only about 20,000 patients are diagnosed with AML each year. So we applied for and received orphan drug status. We also received an orphan drug designation in Europe, again because of the size of the patient population.

What was your biggest challenge at Celator?

Our biggest challenge was trying to get people to believe in what we were doing. Celator was a $60 million market cap company the day before we announced the data. Part of the challenge was that in the AML space, nothing had worked or been approved in decades – although not for a lack of trying.

In addition, people were questioning whether the technology platform could really show an improvement compared to the conventional administration of the same two drugs. We answered those questions with the Phase III outcome. Normally, you’d like to see an appreciation in the value of the company as you progress toward the data announcement. Although we did not see it before the data announcement, it certainly happened post-data announcement.

Why was the Jazz acquisition right for Celator?

After we announced the Phase III outcome, the company received considerable interest from other pharmaceutical companies. The plan we were following was to commercialize VYXEOS on our own in the U.S. and look to partner the product outside of the U.S. Celator received offers to license VYXEOS, as well as offers to acquire the company. After thoroughly evaluating our strategic options, our board of directors unanimously determined that the all-cash transaction presented by Jazz Pharmaceuticals was in the best interest of our stockholders.

The planned combination of Jazz and Celator is highly complementary, since both companies are dedicated to bringing differentiated therapies to patients who have high unmet medical needs. In addition, Jazz Pharmaceuticals’ clinical and commercial expertise in hematology/oncology and existing international infrastructure would help realize the value of VYXEOS as a treatment to patients with AML.

What does it take to succeed in this industry?

There was one individual—I won’t name him but it’s the CEO of another company and a person I think highly of —who sent me an email that I printed out and posted on my wall next to my desk. It says: “A few words popped into my mind when I saw the [press] release: courage, passion and perseverance.”

I shared that email with my team and told them, “That’s us— courage, passion, perseverance.” We all believed in the opportunity and were committed to developing this product. As a result it put the company in a great spot. That email is a reminder of what it takes to succeed—courage, passion and perseverance.

What’s next for you?

That’s what I’m sorting through now. I expect to be in an operational role when I find the right opportunity. I separated from Celator/Jazz in late July and the reality of no longer being at Celator is starting to hit me. I feel like I should be out there helping to develop products to improve patients’ lives.

Ashton Tweed would like to thank Scott Jackson for this interview. If your company needs help from members of the Ashton Tweed Life Sciences Executive Talent Bank, we can supply that assistance either on an interim or a permanent basis. Additionally, if you are among the many life sciences professionals affected by the changes in the industry, Ashton Tweed can help you find the right placement opportunity — from product discovery through commercialization at leading life sciences companies — including interim executive positions and full-time placements. In either case, please email Ashton Tweed or call us at 610-725-0290. Ashton Tweed is pleased to continue to present insightful articles of interest to the industry.

Scott Jackson has more than 27 years of experience in the pharmaceutical and biotechnology industry. Jackson served as CEO of Celator from 2008 until July 2016 when the Ewing, N.J.-based company was acquired by Jazz Pharmaceuticals plc. Jackson lives in Harleysville, Pa., with his wife, and their daughter and son. Jackson earned a B.S. in Pharmacy from the University of the Sciences in Philadelphia and an M.B.A. from the University of Notre Dame.